Kotipellon Tila Oy is a dairy farm in Ängeslevä village in the middle of a peaceful parish community located in Northern Ostrobothnia region in Ylivieska.

The farm was founded in 1781, and was divided to 3 parts in the beginning of 20th century. The main farm Kotipelto was moved to a new place in 1956. We are now the 9th farmer couple of the family farm, having been in duty since 1996. 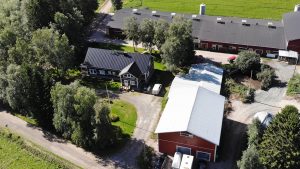 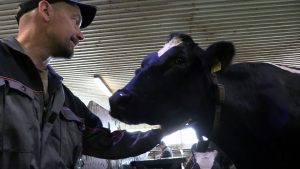 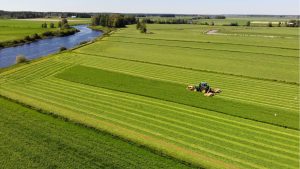 In year 2000 cows moved to a new free stall barn, where milking was carried out in milking station. In year 2007 the new part was constructed to the barn, and milking was robotized then. Along the years, the well-being of animals has been improved in many ways according to new knowledge, either by constructing new facilities or revising the existing ones.

Incorporation of the farm in 2018 and outsourcing of heifer growing in 2019 were the last significant changes in the history of the farm. Today, there is room for 170 milking cows in the barn. Three milking robots serve the cows around the clock. The field area has been quintupled, being now 200ha, together with 80ha of forest. There are 3 permanent workers added with some seasonal workers when needed.

The cows convert self-produced fodder to milk in the most environmental way. Cows live in a free stall barn, where they can visit the milking robot according to their own rhythm. There is stable temperature and fresh air provided throughout the year. During their dry period, cows are having vacation in open-air shelter. Calving is supported in dedicated calving stalls, where both the cow and her calf have peace to spend their time. Teenager calves grow to calving heifers in the subcontracting farm nearby, where they have a plenty of room in free area barn, which provides outdoor recreation possibilities throughout the year.

Calves and cows are in the main focus of our work. Calves get a name when they’ve been born, and they are cared as queens for the rest of their life. The oldest cow Vanessa is already 15 years old and still gives milk. For us, the cows are companions and co-workers for us, and our duty is to serve them and provide such species-specific conditions, that they stay satisfied and get individual care. Only healthy and happy cow gives a milk of good mood.

Calves and cows need a lot of fresh food with good nutritional value, and that’s what we’re working for during the summer times. The fields are growing mainly grass, which is one of the best species to store carbon with its strong roots. In addition, some barley and oat, occasionally also maize and triticale, lucerne and peas are growing in fields for the supportive fodder of farm animals. The most ecological approaches are considered and practiced in every step of the work. Our main approach is to take care of the soil condition, paying attention to nature around. Nutrients and pH levels are analyzed with regular soil samples. The fields are limed according to results, and fertilizers are only used for supplementing the lacking components in soil. This way, the nutrient leaching can be minimized and the vegetation grow wells and produces a good yield.